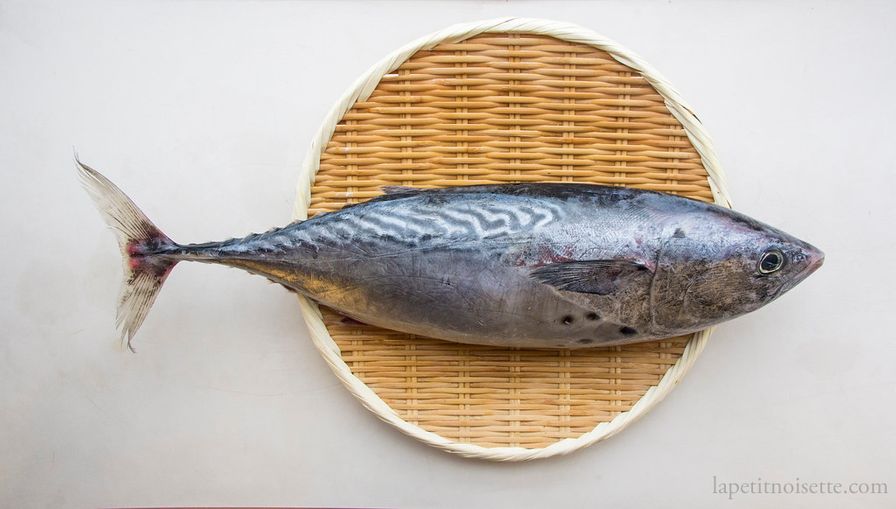 Origin: Shizuoka. Katsuo is widespread from the temperate zone to tropical water. It is known as a highly migratory species and in fact, fished by many nations. In Japan, Katsuo starts its journey from the Kyushu area in March, passes the middle of Japan in April and May, and reaches the North of Japan around August to September before making a U-turn to head south again.

Fish facts: Katsuo can live up to 10 years, and an adult fish can be over 1 meter in length. However, the main size of Katsuo in the market is usually 40-60cm. Katsuo actually dies if it stops swimming. This is similar to Bluefin Tuna because, unlike the other fish which can move the gills themselves, Katsuo and Bluefin swim to let the water pass through their gills.

Kochi is the most famous place for Katsuo Tataki. It is told when that the lord of Kochi banned luxury food and raw fish, the people in Kochi grilled the surface of the fish while keeping the meat inside raw, and called it Tataki. Another story for Tataki is that people grilled the surface in order to kill a white parasite called tentaclaria, which in fact is not harmful to humans.

Hagatsuo meat is red and light taste, while Modorigatsuo is chewier.

Taste/Cooking: The most famous dish of Katsuo must be Tataki, when it is cut into sashimi slices and grilled quickly on the surface. Its bones and head can be used to make a soup broth. Some restaurants also provide Katsuo Tempura, Grilled Katsuo with Salt, etc. Last but not least, Katsuobushi, also known as bonito flakes, is the main ingredient to make dashi (a broth that forms many soups and sauces), and also a great topping for Okonomiyaki and Takoyaki.